The alessi 9091 kettle designed by Richard Sapper is beyond beautiful… it sings, it shines, it boils water and it gets better with age… 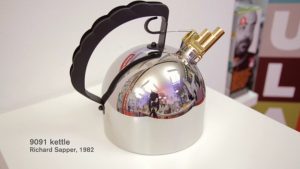 Launched by Italian brand Alessi in 1982, the kettle features two whistles, each tuned to a different note, so that a harmony is produced when water in the kettle boils. Richard Sapper was a German designer and the story goes that Black forest craftsmen used a small pipe (pitch pipe) to tune musical instruments as the pipes produced the perfect note. Sapper took this lead and designed the small pitch pipes into the kettle whistle that is made from gold plated brass. 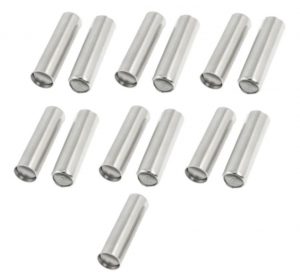 I purchased my 9091 kettle shortly after they were released in 1982. I love a cup of hot steamy tea – even in the summer. There is something transcending about immersing my senses into a just filled hot cup. Being an architect, I also love beautiful things.

In the thirty plus years of use, the first thing to vanish – about a decade in – was the little rubber grip on the spout pull. I was told by the house sitter that “it just popped off”, never to be seen again. OK. So I got used to using a potholder to pull the spout. Then the plastic handle cover slowly started to melt away at the bottom, like a Dali painting. I tried to clean it up but eventually a majority of the plastic was just gone and one day it was down to bare metal. Definitely had to use the pot holder now. On a recent birthday, my husband announced that he was going to refurbish the kettle and replace the parts that had been lost in time. I was having nothing to do with that. The kettle had come into its own. Like a great old building, it was losing unessential parts and becoming more of its essence. I loved the patina and clean lines. I believe the kettle has purposefully discarded everything that did not serve and is aging with elegance.  Good design is like that. 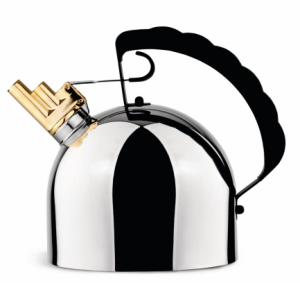 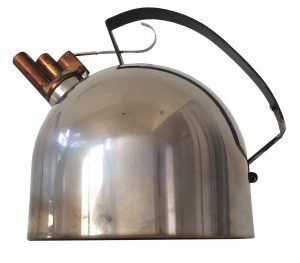